NOTE:?Where it is feasible, a syllabus (headnote) will be released, as is being done in connection with this case, at the time the opinion is issued.The syllabus constitutes no part of the opinion of the Court but has been prepared by the Reporter of Decisions for the convenience of the reader.See United States v. Detroit Timber & Lumber Co., 200 U.?S. 321 .

SUPREME COURT OF THE UNITED STATES 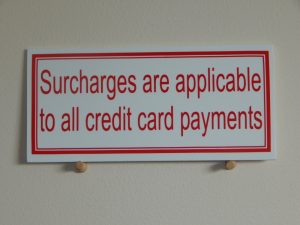 New York General Business Law ?518 provides that ?[n]o seller in any sales transaction may impose a surcharge on a holder who elects to use a credit card in lieu of payment by cash, check, or similar means.? Petitioners, five New York businesses and their owners who wish to impose surcharges for credit card use, filed suit against state officials, arguing that the law violates the First Amendment by regulating how they communicate their prices, and that it is unconstitutionally vague. The District Court ruled in favor of the merchants, but the Court of Appeals vacated the judgment with instructions to dismiss. The Court of Appeals concluded that in the context of single-sticker pricing?where merchants post one price and would like to charge more to customers who pay by credit card?the law required that the sticker price be the same as the price charged to credit card users. In that context, the law regulated a relationship between two prices. Relying on this Court?s precedent holding that price regulation alone regulates conduct, not speech, the Court of Appeals concluded that ?518 did not violate the First Amendment. The Court of Appeals abstained from reaching the merits of the constitutional challenge to pricing practices outside the single-sticker context.

1.?This Court?s review is limited to whether ?518 is unconstitutional as applied to the particular pricing scheme that, before this Court, petitioners have argued they seek to employ: a single-sticker regime, in which merchants post a cash price and an additional credit card surcharge. Pp.?5?6.

2.?Section 518 prohibits the pricing regime petitioners wish to employ. Section 518 does not define ?surcharge.? Relying on the term?s ordinary meaning, the Court of Appeals concluded that a merchant imposes a surcharge when he posts a single sticker price and charges a credit card user more than that sticker price. This Court ?generally accord[s] great deference to the interpretation and application of state law by the courts of appeals.? Pembaur v. Cincinnati, 475 U.?S. 469 , n.?13. Because the interpretation of the Court of Appeals is not ?clearly wrong,? Brockett v. Spokane Arcades, Inc., 472 U.?S. 491 , n.?9, this Court follows that interpretation. Pp.?6?8.

3. Section 518 regulates speech. The Court of Appeals concluded that ?518 posed no First Amendment problem because price controls regulate conduct, not speech. Section 518, however, is not like a typical price regulation, which simply regulates the amount a store can collect. The law tells merchants nothing about the amount they are allowed to collect from a cash or credit card payer. Instead, it regulates how sellers may communicate their prices. In regulating the communication of prices rather than prices themselves, ?518 regulates speech.

4.?Section 518 is not vague as applied to petitioners. As explained, ?518 bans the single-sticker pricing petitioners argue they wish to employ, and ?a plaintiff whose speech is clearly proscribed cannot raise a successful vagueness claim,? Holderv. Humanitarian Law Project, 561 U.?S. 1 . Pp.?10?11.